Who Writes the Future

Jacob Ward (formerly Mathematical Institute) worked with the Bodleian Library on the project that aimed to diversify the voices writing the future by inviting young people to collaborate with science and humanities researchers and a ‘writer in residence’.

The project at a glance:

From the uncanny predictions of HG Wells to the dystopian societies depicted by Margaret Atwood, fiction has a rich and varied history of looking to the future.

‘Our aim with “Who Writes the Future?” was to increase the number of young, diverse voices thinking and writing about the future of technology and how it’s governed,’ says Dr Jacob Ward, a historian of computing at Maastricht University and former postdoctoral researcher in Oxford’s Mathematical Institute.

‘I spotted the call for participants in the PER Lab during my first couple of weeks as a postdoc in Oxford,’ says Jacob. ‘At that stage I hadn’t come up with the idea for “Who Writes the Future?”, but I was interested more broadly in developing my public engagement skills and designing a project.

‘As a historian of computing, I had to think hard about how to make my work engaging in a way that also facilitated public engagement with current science. I realised that I could use my historical knowledge of futurology and science fiction to create a project that used these disciplines to engage students with up-to-date research in computer science. One of the key messages from PER Lab workshops was that audiences are more likely to be engaged when they are actively doing something. So I combined my ideas into a project that would result in a science fiction anthology which could then reach broader audiences.’

‘Who Writes the Future?’ developed into a one-week science fiction-writing summer school for 14-to-17-year olds, run in partnership with Bodleian Libraries. Sixteen participants – including 11 girls – were recruited from Oxfordshire state schools, along with professional author Jasmine Richards and professional illustrator Nurbanu Asena. The finished anthology was launched in October 2019 at the Weston Library as part of the IF Oxford science and ideas festival.

Jacob says: ‘Diversity was a key goal in the recruitment process of both the participating students and our creative writing tutor and illustrator, and we were aware that this might also have a secondary benefit of exposing a diverse group of students to computer science research at Oxford.’

Rodger Caseby, education officer at the Bodleian, helped manage the summer school from an operational, ‘nuts and bolts’ perspective. He says: ‘The project was hugely worthwhile. As well as the satisfaction of having their writing published, the students I spoke to all said they enjoyed the creative freedom and informal structure of this environment, and having the guidance of a professional author and illustrator. They gelled really well as a group, encouraged and critiqued each other in a sophisticated way, and were over the moon when they had the printed anthologies in their hands.

‘There were some operational challenges that we can learn from, such as navigating the processes for allocating and accessing the available funds, and arranging transport for the students to ensure that income was no barrier to taking part. We’ll also be using this experience to develop new materials and activities on this theme in the future.’

On the value of researchers working with GLAM on public engagement projects, Rodger adds: ‘It’s quite unusual for academic departments to come to us with an idea, looking for a partner. We at the Bodleian were able to offer suggestions from a project management point of view based on our experience of running events like this, such as homing in on a more specific age group and working directly with schools to identify the students they felt would benefit most from an opportunity like this. We were also able to provide fascinating archival futurology material to inspire the students in their writing: for example, an old edition of the Ladies’ Home Journal predicted both refrigerated transport and something that sounded a lot like television. One student’s story took inspiration from the 19th-century idea of nutritional pills replacing traditional food.’ As well as making use of the Bodleian’s archival material, the 16 completed stories touched on cutting-edge themes including quantum computing, robotics, facial recognition software, and the (mis)use of big data. All of them, it turned out, featured depictions of dystopian futures. ‘I wasn’t particularly surprised by that,’ says Jacob. ‘Dystopia has been such a common theme in young adult and science fiction. However, I would definitely like to have seen some non-dystopian fiction, and I think if I were to do this again I would probably spend more time with students discussing the idea of “plausible utopias”, such as those seen in the work of Kim Stanley Robinson.’

He adds: ‘Overall I think the project was very successful. We had a good week, and the summer school was managed really well by Rodger Caseby, Jasmine Richards and Nurbanu Asena. The highlight for me was the launch reception, where students brought their families and teachers and received physical copies of the anthology. My main lessons learned centred on project management – especially the complexities involved in hiring external contractors and managing a fast publication turnaround between the summer school and our target launch date.

‘Working with GLAM in particular was an absolute pleasure. The team at the Bodleian was very supportive, and I felt it was a great way to access different audiences for public engagement with research. I would definitely work with GLAM again if the opportunity ever arose.’ 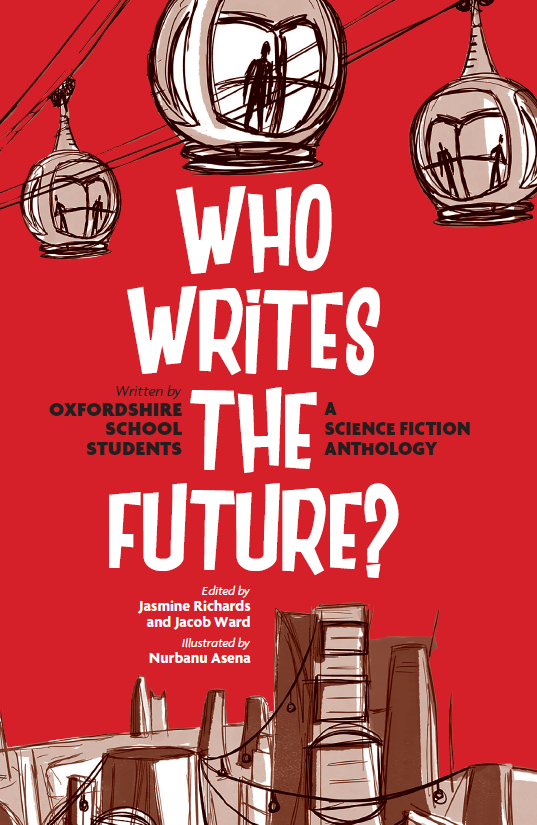 Jacob Ward's position at the University of Oxford was funded by EPSRC under grant EP/R03169X/1.