Top Trumps With a Twist: using games to engage the public

Prof David Pyle (Earth Sciences) took his volcano top trumps to the Games Cafe at the Curiosity Carnival last year. Here he explains his experience, and why having fun with public engagement, and why some times simple activities are the best activities.

I’m a volcanologist, interested in understanding how volcanoes work, and the causes and consequences of volcanic activity. I’m also increasingly interested in research that looks at the societal impacts of volcanoes and eruptions. Along with colleagues at Oxford and other universities including UEA, I’m involved in an innovative project called STREVA – Strengthening Resilience in Volcanic Areas.  We work collaboratively across different disciplines to develop and apply practical and adaptable ways of analysing volcanic risk. This is then used to generate plans that will reduce the negative consequences of volcanic activity on people and assets.

I immediately thought it was important to be part of Curiosity Carnival because of the scale of the event. It was clear it was going to be high-profile. Also someone had already decided that there was going to be a Games Café as part of the carnival, and I had something that was easy to bring out for this event – Volcanoes Top Trumps. So I didn’t have to prepare anything specially; I had something that I already knew would work.

The public engagement that I do, and Volcanoes Top Trumps in particular, has spun out of the research projects that we’ve been doing. The STREVA project is explicitly focused on working with communities on how to live with volcanoes. So that prompted us to think of more creative ways that we could not only engage with communities who live near the volcanoes themselves, but also do the same sort of engagement with communities back in the UK. We came up with the idea of Volcanoes Top Trumps, a card game in the popular Top Trumps format which is now marketed commercially. We recover a small royalty from sales, which we put into a charitable fund, and we’ve just given money to a group in Colombia who are producing a book of paintings and stories by children about living with their volcano.

What was the activity you took part in?

With four or five researchers from different disciplines across the University, I took part in the Games Café at the Weston Library. I didn’t know exactly who the audience were going to be, but I knew there were lots of things we could do with the cards. I’d produced a poster, explaining why we’d created Volcanoes Top Trumps, and then I set a challenge: can you beat a volcanologist? Fantastically, of course, the first 8-year-old who turned up was incredibly good at Top Trumps and beat me! Since the event ran from 7-10pm, I expected we’d have children early on and then it would quieten down – but of course, being Oxford, that didn’t happen, so I was kept busy the whole time.

It was great fun, and the Weston Library was a wonderful place to run the activity. There’s lots of depth to it so it didn’t feel crowded, and there were enough people on hand to keep people entertained and interested. I think the café style activity worked well, particularly with the Living Library taking place there as well. The number of Curiosity Carnival volunteers also really helped things to run smoothly; the staff on duty managed the demand, so we didn’t have people standing around waiting and getting bored, but we did have a continuous supply of people.

The other thing I would say about Curiosity Carnival is this: I came back into Oxford about 6.30pm that day, having been out of the city all day, and it was just a fantastic experience. The light show on the buildings was taking place coincidentally, the centre of town was buzzing with people – it felt amazing. Normally you can’t really tell where the University of Oxford is, but this was the University of Oxford embedded within and part of the city of Oxford, and it was really impressive. 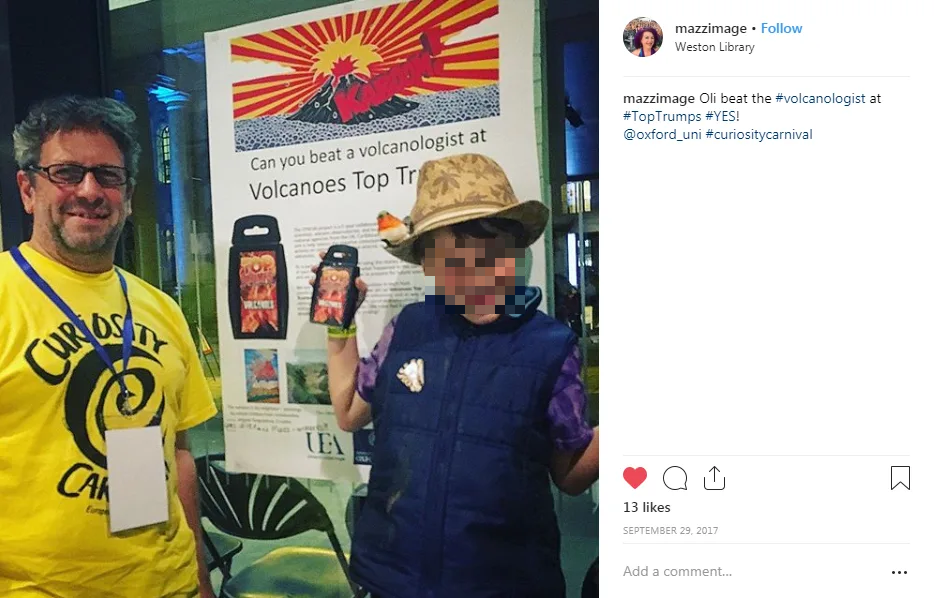 The main thing I would say is that it’s very easy to over-complicate things. The amount of time that you’re going to have with most people is so short. When we do other sorts of engagement activities we might have a stand with just three or four different sorts of volcanic rocks on it, and you can keep someone interested for ages just by picking them up and talking about them. I think the barrier to getting involved in public engagement is probably to do with the perception that it’s going to be a lot of work. Hopefully, with something like Curiosity Carnival, where someone else has done all the hard work of getting it set up, researchers just have the chance to turn up with something simple – whether it’s a coloured liquid in a test tube, or a model – these things always go down well. You just need an interesting starting point.

At the end of the day I think public engagement is fun, and it’s rewarding because of that. But because my research has now become much more about engaging the people who are affected by volcanoes, that’s opened up a whole new area of finding out about people who’ve been affected by volcanoes in the past, and looking at the stories that people have told about volcanoes. The more I become involved with public engagement, the more it opens up research questions. It really is the case that the engagement is feeding back into the research questions, which are no longer research questions embedded in the pure science but at the intersection between science and society. I’ve really enjoyed that process.

I can perfectly well imagine that some colleagues, who are researching in deeply theoretical areas, might think ‘What’s in it for me?’. Actually I still think it’s important to be challenged to think of ways to explain what you’re doing and why it might be of interest to people. I think some researchers might be surprised at how interested people are in finding out about the obscure and the wonderful.

Read: Are games an effective way to teach conservation?

This case study was written by Sarah Loving